13th January 2021, Skopje – Our economy will get back to the growth trajectory this year, reaching the pre-crisis growth trajectory next year. We project higher growth rates in the medium term, reaching 5% on average in the coming 5 years, coupled with fiscal consolidation aimed at growth sustainability, Minister of Finance, Fatmir Besimi, said at the Central and Eastern European Virtual Forum, organized by Euromoney, which is one of the leading traditional events in the field of finance. 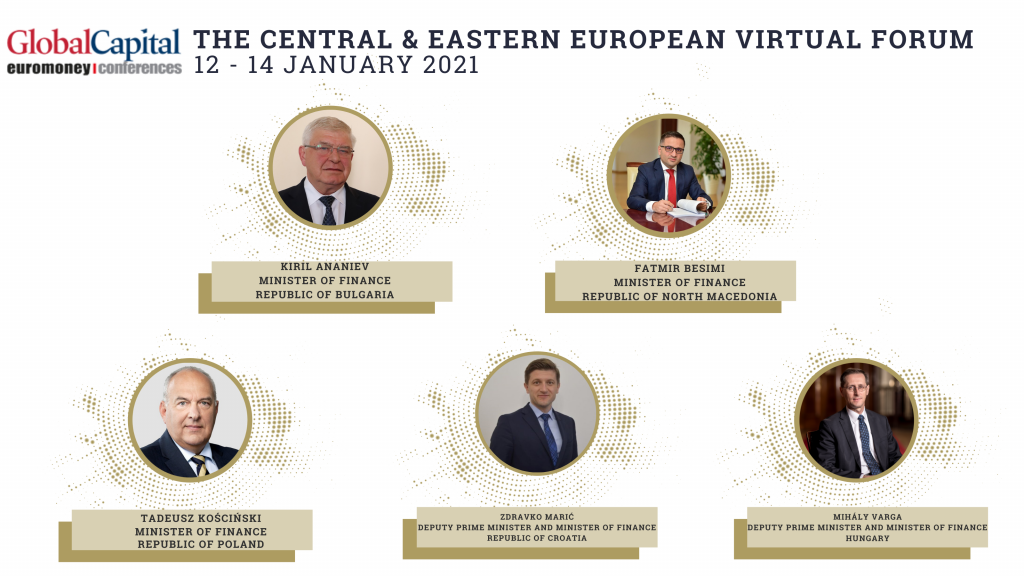 Besides Minister Besimi, Vice Prime Ministers and Ministers of Finance of Croatia and Hungary, as well as Ministers of Finance of Poland and Bulgaria, took part in the panel discussions. Ministers of finance, governors of central banks, heads of financial institutions and investors regularly participate in the Euromoney Forum. Every year, participants’ discussions and analyses are focused on the most important issues pertaining to the financial markets and the economies in Central and Eastern Europe in general. This Forum is a rare event of this kind, providing for networking the economists interested in the CEE region – both the representatives of the policy-making institutions and the representatives of the banking sector, the participants on the financial markets and the investors.

Minister Besimi pointed out that recovery of investment activity, consumption and net foreign demand is expected this year, with projected growth of 4.1% in line with the baseline scenario. The baseline scenario assumes weakening of the health crisis and gradual improvement of the epidemiological picture, improved utilization of the production and the services capacities, favourable effects from the economic measures, as well as boosted confidence of both the consumers and the investors.

He underlined that redesigning the budget policy and the policies aimed at economic recovery and intensified growth (SmartER Growth) are solid basis for accelerating the economic growth in the coming period, getting the economy back to the pre–crisis trajectory in the second half of 2022 and ensuring accelerated growth dynamics in the medium and the long term. Main objective in the medium term, as the Minister pointed out, is for economic growth to accelerate from 2.6%, as the average in the previous decade, to around 5% on average in the coming five years, thereby attaining fiscal consolidation so as to ensure sustainable and inclusive growth.

Minister of Finance Besimi said that Government response to the pandemic through the fiscal policy was fast, carefully targeted and significant from the point of view of support to enterprises and the employees in the activities hit the most by the pandemic and the vulnerable groups. Four sets of measures were aimed at supporting the households and their consumption, supporting the companies so as to protect the jobs and improving their liquidity, as well as supporting both the investments and the export. He underlined that government support will continue in 2021 as well through different measures, all to the end of faster recovery of the national economy and creating basis for accelerated economic growth in the longer term.

As regards attracting foreign direct investments, the Minister said that new legal solutions are aimed at attracting higher-value-added investments. He also stressed that, in the past years, share of export of the companies in TIDZ in the total export of goods was constantly increasing, reaching 43.5% of the total export in 2019. Minister Besimi pointed out that as a result of the foreign investments in the zones, export structure improved, i.e. share of higher-value-added products, mainly machinery, transport equipment and chemical products, increased, reaching 57.2% of the total export in 2019 compared to 17.3% in 2010.